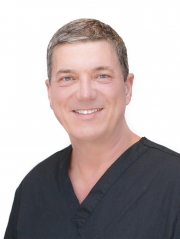 Dr. Clark S. Metzger received his undergraduate education at Louisiana State University from 1977 to 1980, and was admitted to the University of Tennessee center for the Health Sciences without an undergraduate degree to pursue his MD and graduated Magna Cum Laude in 1985. He completed his residency in orthopedic surgery at the University of South Alabama in 1990. He then completed a one year fellowship in spine surgery at the University of Pittsburgh. He began his spine practice at West Florida Hospital in 1991 and has practiced there and in Covington County Alabama for the last 25 years. He has embraced minimally invasive spine surgery from day one. He also performs the full range of spine surgeries including a special interest in neuromodulation. He and Dr. Giovanini have been friends for over a decade and have identical views regarding the multidisciplinary approach to spine surgery, with a strong preference for the use of minimally invasive procedures when possible.